In one sentence, bitcoin is a form of digital currency.

In many sentences, bitcoin can be described as follows:

A system based on open-source code

A decentralised and distributed network

For a quick summary of what bitcoin is, watch the following short video uploaded by weusecoins.com.

We will next learn more about the enigmatic person who created it.

Bitcoin was created by Satoshi Nakamoto.

“Satoshi Nakamoto is supposedly a man born on 5th April 1975 and living in Japan. However, some speculations describe Nakamoto as a person of Caucasian descent living in the United States and a number of European countries.”

No one knows who Satoshi Nakamoto is1. It could be a man, a woman, a collective group of programmers, an intergalactic space traveller from the future, or simply AI on a computer…no one really knows.

All we know is, Satoshi Nakamoto is a pseudonyma fictitious name used to conceal the real identity of a person.

Nakamoto claimed to have started working on the bitcoin code in 2007. In October 2008, Nakamoto published a whitepaper titled Bitcoin: A Peer-to-Peer Electronic Cash System on the cryptography mailing list at metzdowd.com, with the following remark:

I’ve been working on a new electronic cash system that’s fully peer-to-peer, with no trusted third party. The paper is available at: http://www.bitcoin.org/bitcoin.pdf. The main properties are:

Advertisement:
“Interesting to note, embedded in the transaction detail of the genesis block, was the text: The Times 03/Jan/2009 Chancellor on brink of second bailout for banks. An allusion to the problem that bitcoin was created to solve, perhaps?”

In January 2009, Nakamoto released the first bitcoin software that launched the Bitcoin network and the first units of the bitcoin cryptocurrency, denoted by the currency code BTC and the symbol ₿. The first bitcoin was released into circulation on 3rd January 2009 through a process known as miningthe process of validating bitcoin transactions by deploying computational power on the Bitcoin network and in return for the expense of power and electricity, miners are rewarded with newly minted bitcoin as defined by the Bitcoin generation algorithm.. The first block, known as the genesis block of bitcoin or block number 0, carried a reward of 50 bitcoin. We will learn more about this in How Bitcoin Mining Works and Bitcoin Supply Parameters.

Bitcoin has now been running for over a decade and has revolutionised cross-border payments around the world in a way no monetary systems ever did. It led to the development of a series of other cryptocurrencies that adopted its blockchain technology and changed the way humankind operate and transact value.

The ISO 4217 currency code for Bitcoin is XBT. However, at the moment it is an unofficial code according to the ISO 4217 standard. The unit name BTC is also commonly used to represent one bitcoin, but it violates ISO 4217 because it begins with “BT”, the country code of Bhutan. Bhutan does not actually use the code BTC for any currency, and XBT has not yet defined which unit it represents, just that it represents some unit of bitcoin, so the Bitcoin community is likely to continue using mainly BTC as a unit name and currency code for some time.

In early 2011, Satoshi Nakamoto passed the reins completely over to Gavin Andresen, a computer science degree graduate from Princeton who had worked full-time alongside Nakamoto on bitcoin since December 2010. While Gavin Andresen was a known figure within the bitcoin community space, Nakamoto’s identity remains unknown even to Andresen.

Nakamoto also transferred several related domains to a few prominent members of the bitcoin community, and was never heard of again.

In reality, it doesn’t really matter who Satoshi Nakamoto is, because the Bitcoin network runs on a system regulated by the universal laws of Mathematics.

Similarly, it may be nice to know that Sir Isaac Newton had formulated the laws of motion and universal gravitation, but in reality we do not need to know Mr Newton personally to fully appreciate the laws of gravity on a daily basis. Gravity happens regardless of whether you have heard of Mr Newton or not.

Likewise, Bitcoin remains operational and fully functional regardless of whether Nakamoto’s identity is known or not.

…how bitcoin helps citizens of impoverished nations deal with failing currencies and hyperinflation.

…how bitcoin helps the unbanked adult population participate in the world marketplace economy, without needing a bank account they may not eligible for. Or simply,

…how bitcoin allows people to send money quickly and at very low cost, regardless of geographical distance, time of day, and day of week.

The Bitcoin network now runs autonomously around the world, free from centralised and authoritarian control.

Being truly decentralised and distributed in nature, bitcoin cannot be shut down and continues to thrive and flourish in a world that needs its technology. And as has been proven over the course of human civilisation, technologies that benefit mankind will always persevere, prevail and push its way into adoption.

“…the government realized they can’t shut down bitcoin. There’s simply no way. With these technologies, once the genie is out of the bottle you can’t put it back in…”

In a world where corrupt financial systems are abused and exploited, political influence that seeks totalitarian power will not favour a phenomenon that upsets the status quo. It is probably to Bitcoin’s interest that its inventor was never identified other than by a pseudonym. 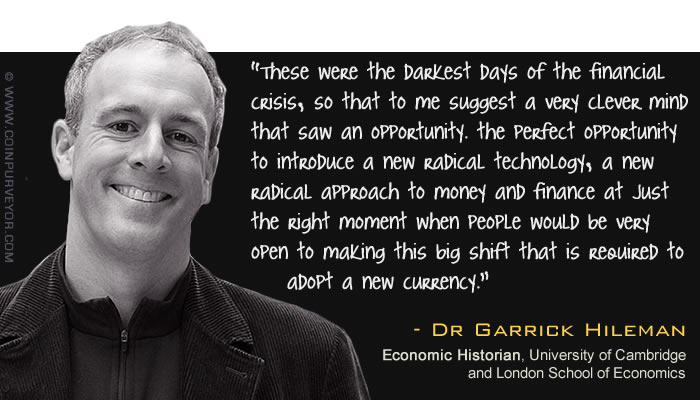 Nevertheless, should Satoshi Nakamoto cease to exist, the Bitcoin network will continue to operate and run as it should. And that is Satoshi Nakamoto’s contribution to the world.