Bitcoin Gold (BTG) is a hard fork altcoin derived from Bitcoin which occurred on Block No.491407 on 24th October 2017.

Despite its intention to restore GPU mining to Bitcoin so that it becomes accessible to more miners around the world, Bitcoin Gold had received some flak from the community from the onset, including the hidden 0.5% mining fee added by a BTG developer and this fee was promptly removed by some mining pools upon its discovery.

In mid-November 2017, some Bitcoin Gold users had also reported that their Bitcoin, Bitcoin Gold, Ethereum and Litecoin were stolen from their source wallets, as their recovery seed and passphrase had been compromised in the endeavour to retrieve their Bitcoin Gold by exposing their private keys using multi-cryptocurrency wallets.

This was also faced by crypto-users during the Bitcoin Cash hard fork using similar extraction methods. When it comes to hard forks and claiming these altcoins, using methods that generate your private keys in such manner will subject your holdings to some degree of risk and is usually not advisable unless follow-up measures are taken, such as removing the coins from their original wallet and transferring them to a different wallet (and hence, to a different set of private keys).

How to Claim Bitcoin Gold from Ledger Nano S

Today, we will be exploring a method to claim Bitcoin Gold from your Ledger Nano S hardware wallet.

Hardware wallets are one of the safest ways to store your cryptocurrencies, and the method outlined below utilises a tool released by Ledger and is all executed within its own system without exposing any private key on an external program or app. Let’s begin!

The following method assumes that the user already understands how the Ledger Nano S works and how such a device operates, including using the Chrome extension apps and Ledger Wallet Manager to add and delete wallets.

For users who do not know how to operate this, you are advised to refer to the Ledger website on how to do this, as it is beyond the scope of this guide to delve into the basic usage and operation of this hardware wallet.

A. Installing the Bitcoin Gold Wallet 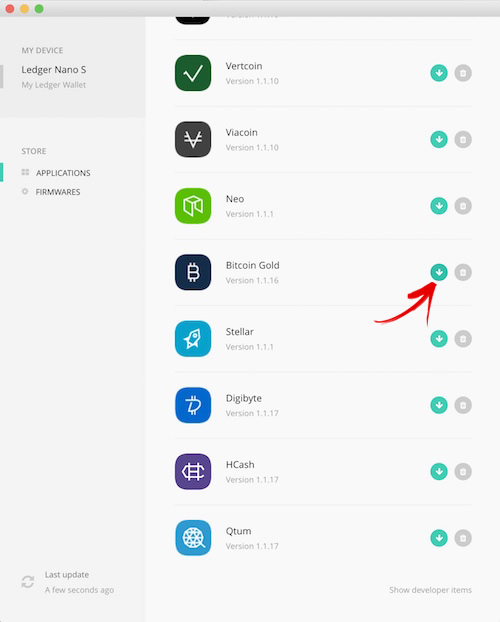 A1. Launch the Ledger Manager app on your Chrome browser, connect your Ledger Nano S and key in your PIN. Before proceeding, please ensure that you have the latest firmware version installed. This can be checked by clicking on Firmwares on the left column in the screen above.

The Ledger Manager will open and show a list of wallets as shown above. Scroll down the list and look for Bitcoin Gold, and click on the Install Wallet button. If you do not have the Ledger Manager installed or do not know where to launch it from, kindly refer to the Ledger website.

N.B. If you receive an error message Unable to install application, it means your wallet has reached the maximum number of wallets that can be installed. Please refer to a2 to first uninstall and delete another wallet. If your Bitcoin Gold wallet is successfully installed, please jump to b1 below. 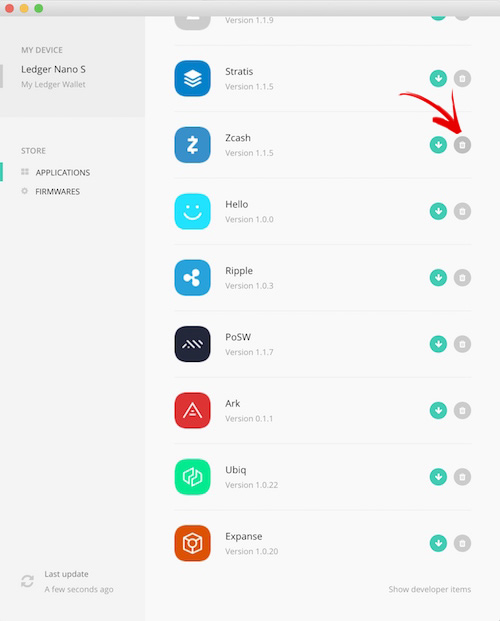 N.B. Note that funds in an existing wallet is not lost when a wallet is deleted. Your altcoins remain on the blockchain, and can be viewed again by reinstalling the wallet at any time. For now, we would like to create space in the device by removing a wallet which is seldom or never used.

B. Claiming the Bitcoin Gold 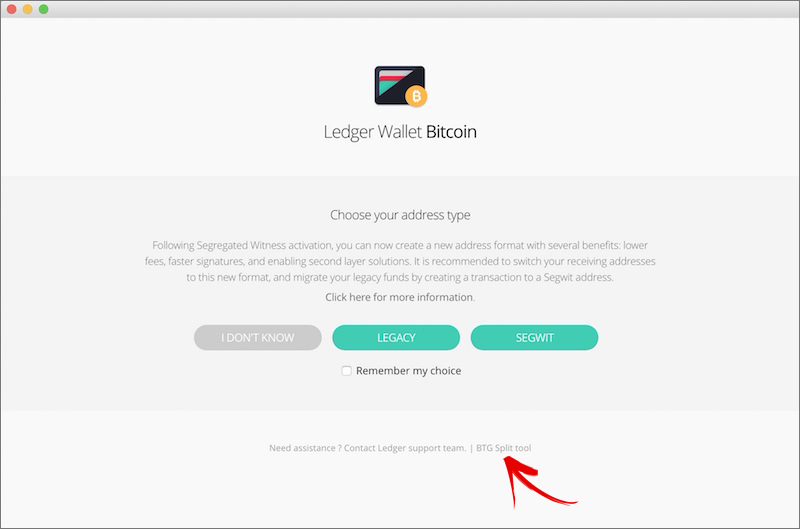 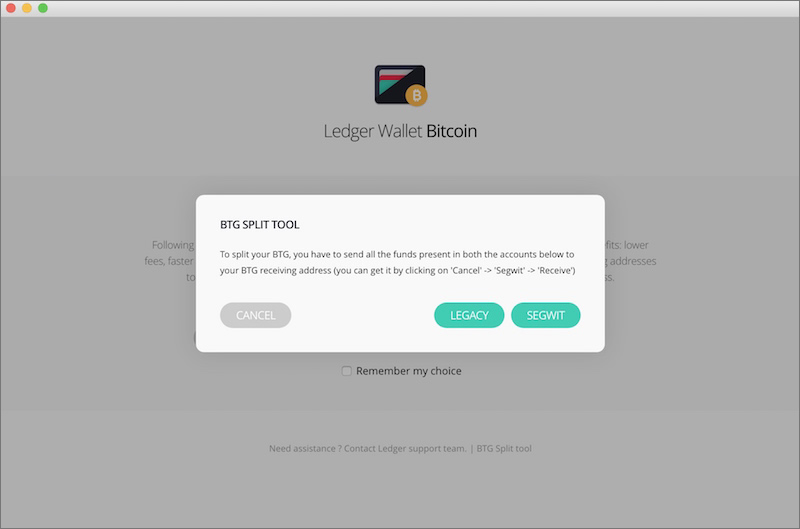 B2. On the following screen, select the wallet where your Bitcoin was stored before the date of the BTG hard fork. Click on Legacy or SegWit. In this example, Legacy was selected as there were 2.2 BTC in this device’s bitcoin Legacy Wallet and none in the SegWit wallet on 24th October 2017. 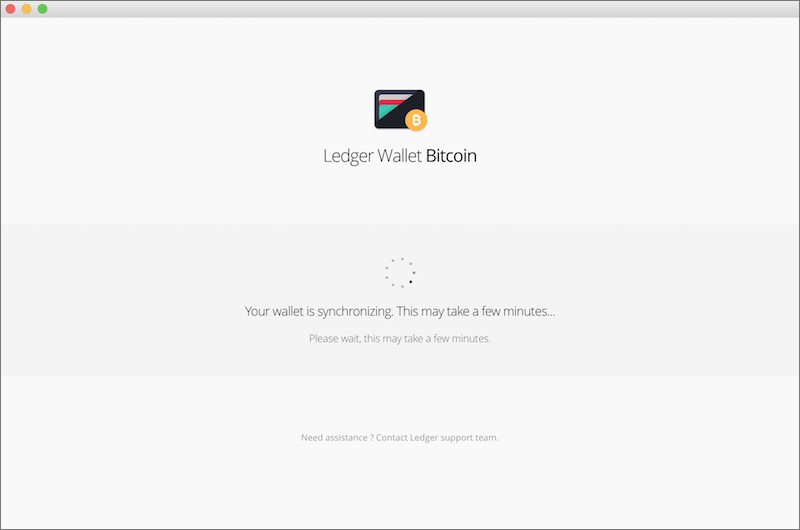 B3. Allow the Ledger Nano S to work on the split for about a minute or two. The wallet synchronisation here tracks back all your bitcoin transactions prior to today to verify how many Bitcoin was available in your private key before the forking date on 24th October 2017. 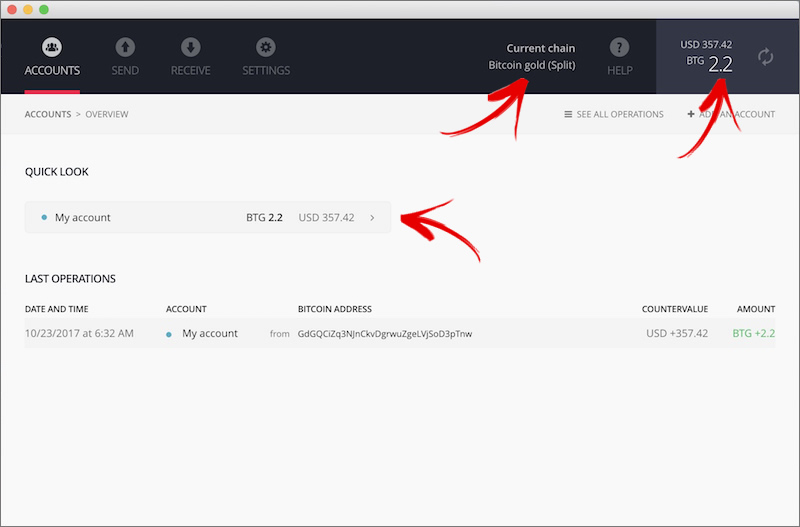 B4. Upon completion, your Bitcoin Gold wallet will be shown as indicated at the top – Bitcoin gold (Split). The quantity of Bitcoin Gold from this split is shown (2.2 BTG) as well as the equivalent currency value (USD357.42) based on the current exchange rate.

You can now close the wallet and disconnect your Ledger Nano S.

Some people have reported that upon exiting and reopening their Bitcoin Gold wallet, the BTG was found missing and the Split process in Step b3. had to be repeated to reclaim the BTG. That’s because after the split is done, the BTG is sitting in the Bitcoin Gold (Split) wallet. You will need to send this out to either the Bitcoin Gold Legacy or SegWit wallet. To do this:

You may also send to the BTG Segwit address if you prefer. Either address format is fine.

Please take note of the following precautions as well:

You may convert your Bitcoin Gold to bitcoin or other cryptocurrencies at Binance or Kucoin, and then cash it out at your regular local bitcoin exchange.